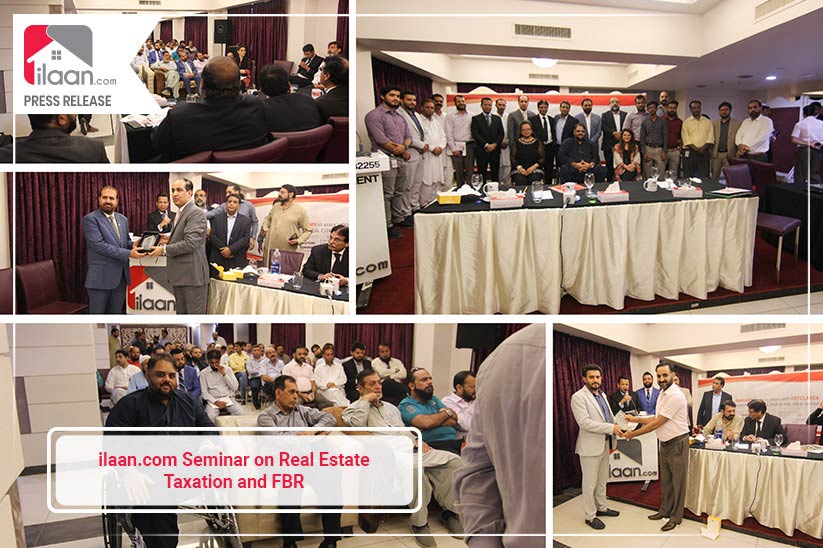 (Karachi – October 2019) DEFCLAREA and ilaan.com had another informative yet productive meetup where taxation issues, role of FBR, and other topics related to real estate in Pakistan were discussed. Amjad Javaid Hashmi, the keynote speaker and Legal Counsel DEFCLAREA, shed light on these most confusing topics and explained everything in detail that led to a very healthy discussion session.

Real estate taxes are the most understood concept in the country and a fraction of stakeholders and the general public are aware of them. Amjad Javaid Hashmi explained the amendments in the current laws, filer & non-filer difference, and emphasized the importance of understanding these changes. He also talked about the current scenario of FBR and SRB and a number of attendees had some questions about that to which he gave concrete answers.

“Property income has seen a progressive change and this year the rates have changed. This is a good move because the tax rates have been made progressive. What that means is that the more you earn, the more you have to pay the tax. The concept of progressive tax and effective tax rates should be clarified first in order to understand how the taxes affect the pockets”, said Javaid Hashmi.

The meetup was organized by DEFCLAREA in collaboration with ilaan.com. DEFCLAREA continues to fulfill its promise towards helping real estate agents evolve and such meetups are proving to be quite helpful in the mission. Under the leadership of President Noor Abrejo, DEFCLAREA will organize more sessions like these in the future. DEFCLAREA is also keen to eliminate fake businesses from the real estate sector and ilaan.com is being the helping hand in that manner.

Appreciating the role of ilaan.com, Imtiaz Siddiqui Joint Secretary DEFCLAREA said, “ilaan.com is one of the very few businesses with a vision to help the Real Estate community & take initiatives for the betterment & welfare of the agents.” “Mian Omer CEO Ilaan.com has the vision to work for the betterment of Real Estate Community & this event in association with DEFCLAREA is organized with an aim to practically implement his visionary thoughts, more such initiatives will be seen in near future”, added Imtiaz Siddiqui.

President DEFCLAREA also praised ilaan.com and said, “ilaan.com has always stood with DEFCLAREA and their active participation in such initiatives to serve Real Estate community prove that they are working for the betterment of the sector.” During his speech, he mentioned how he is trying to pursue the authorities to follow the fair market model because that will remove all the ambiguities and allow the realtors to still produce better results for themselves and the country’s economy.