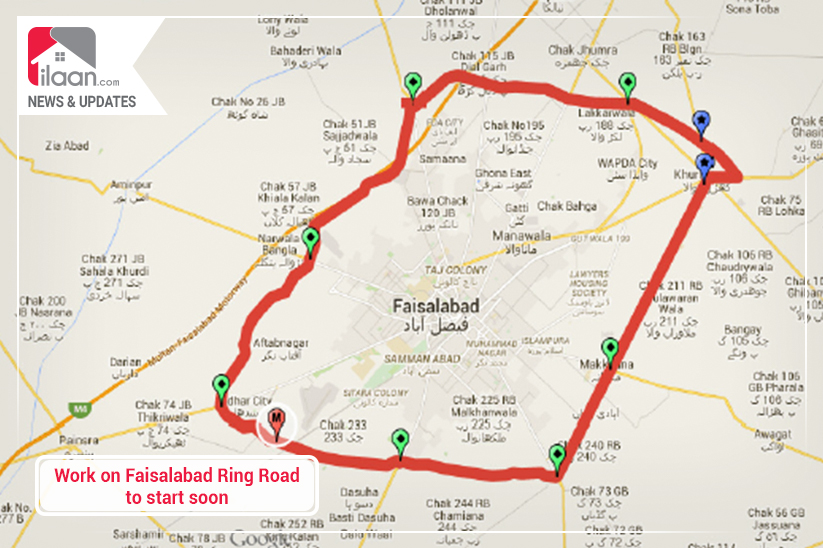 Faisalabad: The Faisalabad Development Authority (FDA) Director General Sohail Khawaja has said that the mega project of Faisalabad Ring Road spanning 80km has been conceived by the FDA at a cost of PKR 400 billion.

According to the news sources, the work on Faisalabad Ring Road will start soon and the Faisalabad Development Authority (FDA) Director General Sohail Khawaja has confirmed that the project is proposed to complete under public-private partnership without involving government funds. While chairing a meeting with the team of Punjab Urban Experts, DG FDA said that the planning was being made to launch different mega projects in the city to raise the quality of city development keeping the future requirements into consideration.

Talking about the Faisalabad Ring Road, he informed that the proposed six-lane ring road would be linked with the two motorways existing around Faisalabad which would only be used by the high-speed traffic vehicles and special controlled areas would be established for the entry and exit of the vehicles and service areas. Moreover, petrol pumps and weigh stations would also be established around the mega-project along with security pickets.

He also expressed hope that the proposed Faisalabad Ring Road project would bring social and economic revolution in the city and the District Chiniot would be seen as a part of this district while Sargodha, Jhang, Okara, TT Singh and Sahiwal districts will also come near to Faisalabad.