PKR 20 Billion Tax Relief to Richest Class by the Government 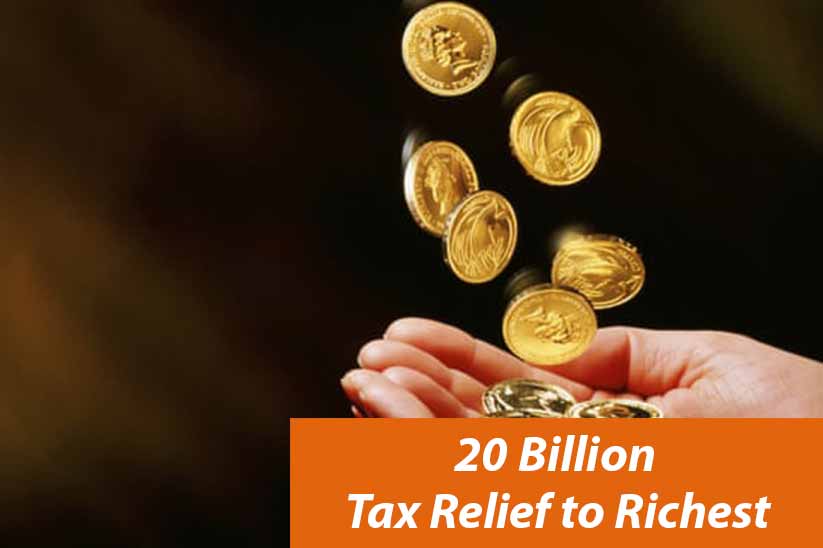 PKR 20 Billion Tax Relief to Richest Class by the Government

Islamabad: The PTI-government has given income tax exemption worth PKR 20 billion to the richest class of Pakistan. Nearly 40% of the amount collected by the salaried class will go to bigger firms.

As per the Budget 2019-20, the government of Pakistan has reduced the tax liability on the inter-corporate dividends by amending and revising the Section 103C of the Second Schedule of Income Tax Ordinance.

The government has not yet disclosed any sort of information in this regard in the budget books to keep this information hidden and private from the International Monetary Fund (IMF). The FBR (Federal Board of Revenue) has confirmed that tax exemption on the dividend income for a group of companies is ensured.

In the Budget 2019-20, the federal government has weighed down every income group, irrespective of whether the salaried class as the capacity to bear the additional burden or not, they have favored largely to the richest class by providing an exceptional tax break.

The big firms of the country were already demanding for such favor from the past three years but Ishaq Dar; the former Finance Minister resisted the demand for two years, confirmed by the sources of FBR. The tax exemption cost of the dividend was estimated to be PKR 14 billion back in 2016.

The beneficiaries of this exemption would be Pakistan’s largest banking sector, manufacturing, fertilizer, cement, car, and food companies. The owners of these companies are counted as Pakistan’s top richest families.

Before the amendment in Section 103C of Income Tax Ordinance, “dividend income that is derived by the company, if the recipient of the dividend, for the tax year has availed group relief under Section 59B”. Now, after the revision, the ‘availed’ word has been changed to ‘eligible’.

With a change of just one word, nearly PKR 20 billion exemption dream has been made into a reality. This exemption is against the policy that was agreed with the IMF and the government of Pakistan, confirmed by FBR.

Due to the toughest economic conditions, the government increased the tax rates for the salaried class with the aim to collect nearly PKR 50 billion in the form of additional revenue. But out of the total amount, nearly 40% of the additional revenue will go into the pockets of the big firms now. Hence the government negates its claim that every group income of Pakistan will be sacrificing for the betterment of the nation.