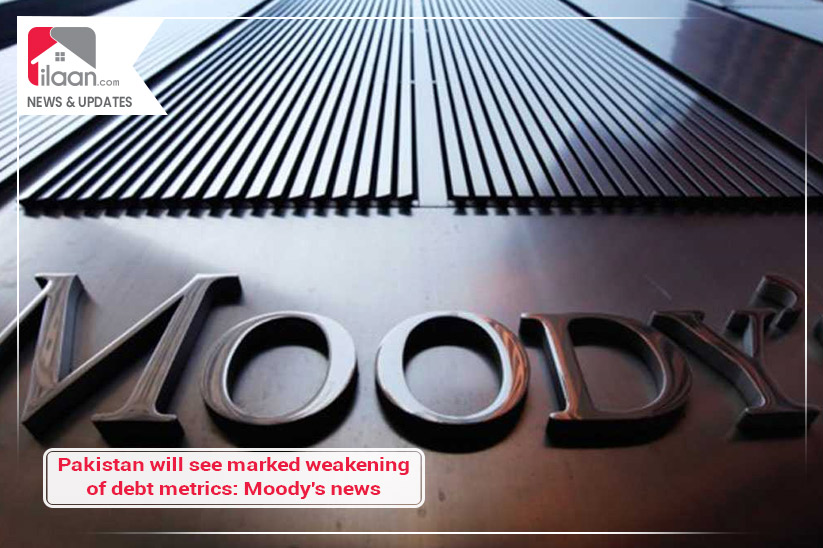 Islamabad: According to Moody’s Investors Services, Pakistan would see a marked weakening in debt metrics due to the large volume of gross borrowing at higher interest rates that increase interest payments when borrowing cost rise and/or narrow revenue bases that push fiscal deficits wider.

In its latest report titled “Low-rated Sovereigns with Large External Repayments Vulnerable to Contagion Shocks”, Moody’s stated that the central bank in Pakistan has delivered sizeable rate cuts amounting to 225 basis points in March, but this cut may not sufficiently offset the tightening in financing conditions related to local-currency depreciation.

Five countries i.e. Sri Lanka, Egypt, Pakistan, Ghana, and Angola would see a marked weakening of these metrics under the stress test. This is due to the fact that their large share of foreign-currency debt, large gross borrowing needs that raise interest payments when borrowing costs rise, and/or narrow revenue bases that push fiscal deficits wider when interest payments rise.

Debt burdens for these five sovereigns under Moody’s stress scenario would be well in excess of the median of around 70 percent of GDP for all non-investment grade emerging market (EM) sovereigns, while interest payments for this group will be close to or exceed 40 percent of government revenue, significantly weaker than the median of 12 percent for all sovereigns in its analysis, maintained in the report.

Moody’s further stated that effective policy responses can mitigate the risk of significantly higher debt burdens and lower debt affordability from already weak starting positions. The Central Bank of Pakistan, according to Moody’s, has already delivered the sizeable rate cut amounting to 225 basis points in March which may prevent the further depreciation of the local currency.