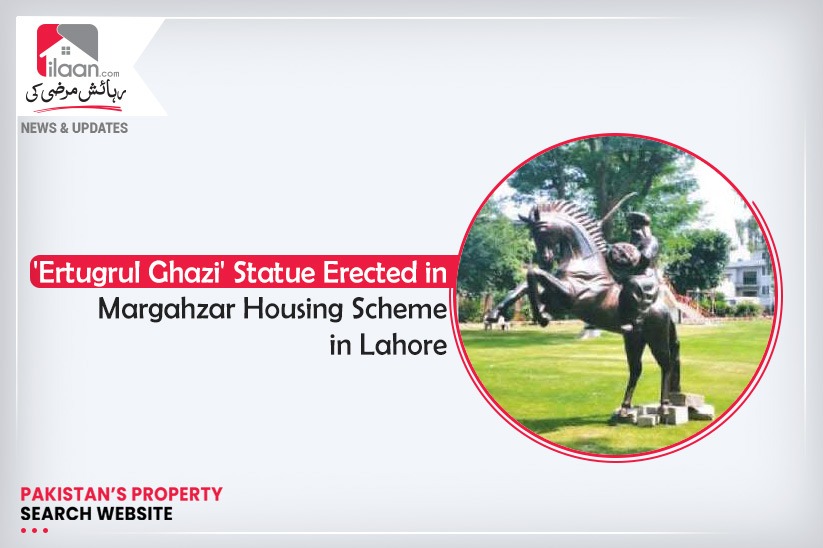 Lahore: The community members of the Maraghzar Housing Scheme have paid tribute to the Turk hero Ertugrul Ghazi by erecting a statue in their neighborhood.

The president of Maraghzar Housing Scheme Muhammad Shahzad Cheema said that he decided to erect the statues of Ertugrul after some of the residents floated the idea of paying tribute to him. Giving details of the project, he says these special statues have been made using fiber and metal in the city of Kamalia of Toba Tek Singh district.

The warrior in the statue installed in Maraghzar Housing Scheme can be seen holding a sword high and riding a horse.

Shahzad Cheema did not reveal the cost of the statues but said that there are two statues that depict Ertugrul on a horse. One of the statues has been unveiled while the other one is going to be erected soon at a central place.

“We will call the place Ertugrul Ghazi Chowk,” says Sohail Anwar Rana, the secretary-general of the scheme, referring to the location of the first statue.

“What has affected me most about this character is the way he united the entire tribe and formed the Ottoman Empire – this is something that the world’s anti-Muslim community cannot digest. Our kids may enjoy the show, but they should be able to also see him in artistic depiction – something physical they can marvel at”.

Ever since the statue has been unveiled, it has become a center of attention of the people who are gathering around it to take pictures. However, the management is ensuring that they follow the SOPs of the government and maintain social distance.

It should be mentioned here that the entire country is smitten by the Turkish television series, based on the character of Ertugrul Ghazi, that is being aired on PTV by the name of Ertugrul Ghazi, originally Dirilis: Ertugrul. The series had been endorsed by Prime Minister Imran Khan himself.

Ertugrul Ghazi, son of Suleyman Shah, was the father of Osman I, the founder of the Ottoman Empire.