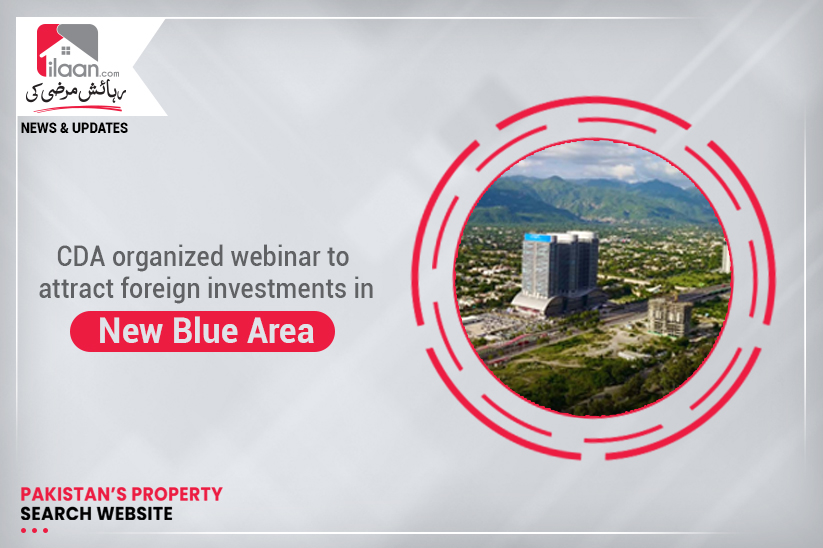 Islamabad: According to the news sources, the Capital Development Authority (CDA) arranged a webinar on Wednesday to create a center of attention of foreign investors to buy plots in the upcoming auction of New Blue Area.

The authority is showcasing 24 plots of blue area in this month that too in an incentivized package under the knowledge of Prime Minister Imran Khan. That area of Blue Area that befalls under in sector G-9 on the southern side of Jinnah Avenue was specifically assigned for the purpose and it was tailor-made by the authority to draw maximum investment and profit. Following people acted as the spokesperson in this webinar

Town Planner Khurram Farid acted as the moderator in this meeting. Addressing this event, SAPM Zulfikar Bukhari stated that in the real estate industry a very important is the locality of any project and the New Blue Area’s location is one of the best locations of the city. People have higher demands of living in this lavish area of Islamabad.

He said that this area has a park face while it is also a professionally planned project and we can see professionalism in every corner of the area. The streets, green belts, plotting and sizes, walking tracks, and the market, everything is where it exactly needs to be at. He also urged Pakistani residing across the borders to invest in this growing project and informed then that a dedicated cell has been made for them where approvals regarding the allotment of plots would be made without any delay. He marked this project as a major source of increasing business activities in Islamabad while it would also increase the value of other commercial properties.

Dr. Shahid Mehmood brought important features of the project into the light and said that CDA has expanded the FAR ratio while multiple users are being allotted for the building construction of this project.  Plots available for purchase here sizes between 672 to 10,000 square yards and works as a center of attraction for sects, investors or builders. He said that the project has an impressive layout and the investor have a bigger advantaged from this project.