Searching to Buy a House in Tajpura Lahore? Here is All You Need to Know 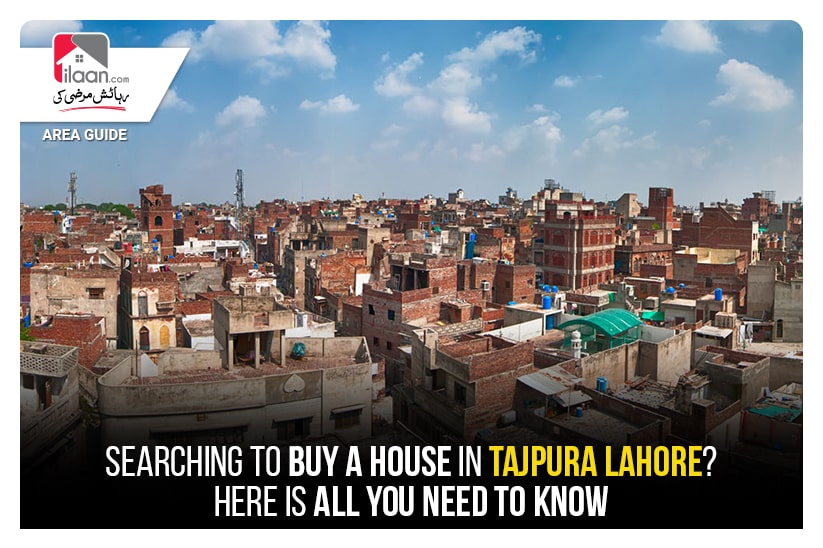 Searching to Buy a House in Tajpura Lahore? Here is All You Need to Know

Lahore is considered to be the second-largest city of Pakistan which possesses a population of about 13 million. It is referred to as “the City of Garden,” Lahore that falls amongst the most beautiful, and very well-developed cities of Pakistan. Lahore having a wide, and extensive road network, huge transmit system, and flawless public vehicle network, is an ideal place for the rest of the provincial capitals of the country. To enjoy a better living standard in Lahore, people do migrate from other regions to here, and for them, houses in Tajpura Lahore will suit them the most.

Tajpura is one of the oldest places in Lahore, and it is a densely populated area of Lahore. This area offers a great variety of residential as well as commercial properties available at reasonable rates. Tajpura is situated near Canal Bank Road and can be easily accessible from Shahjehan Shaheed Road, and Umair Ali Road. The area is very much well connected with routes which lead to another part of the city. Tajpura is situated in the middle of Lahore and is considered a popular residential as well as an investment option.

Major arteries of Lahore, which include Ring Road and G.T, both are present a 4 km to 6 km distance. Additionally, Umair Ali Road, Tajpura is 20 minutes away from the nearest motorway interchange. The Wallet City is also at 10 km`s distance through Canal Road. It will take 25 minutes to reach Allama Iqbal International Airport and Lahore Junction Railway Station from the commercial properties in Tajpura Lahore.

Many famous, and prominent schools, colleges, parks, grocery stores, and hospitals are present in Tajpura Lahore, and the locality. The rest of the major areas of Lahore are DHA, Gulberg, Lahore Cantt, Paragon City are all situated at 7 km to 10 km of distance which means can be reachable in 25 minutes by car from the plots in Tajpura Lahore.

Public transportation is the major need of the big city Lahore, and about 60 percent of the city`s population depends upon public transport to move from one place to another. Various public transport buses cover about every part of Lahore, mass transit systems including orange line train, and metro Lahore do have one of the best and well-developed public transport networks all across the world.

Know about the houses for sale in Tajpura Lahore

A community will be incomplete unless and until it has a commercial area in it to have facilities of pharmacies, grocery stores, general stores, clothing stores near your home. Stores, shops, cash and carry, etc near to your home can do wonders for the entire real estate value, and this will make survival easy for people living in houses in Tajpura Lahore. As Tajpura is one of the oldest regions of Lahore, there are a great number of small shops, and small businesses present here.

Big Shop is a writing material, gift shop and gives printing services, it is situated on Umair Ali Road and can be reached by foot in less than a short way from each edge of the houses for sale in Tajpura Lahore. Marhaba General Store is great for consistently shopping for food that offers a decent determination of items at sensible costs, the store is situated in New Tufail Street, Tajpura Lahore.

Tufail Karayana Store, Khalid General Store, and Mitho General Store are completely situated in Tajpura, Lahore, and proposition a wide assortment of merchandise that can satisfy the day-by-day shopping needs of the occupants.

There are an enormous number of houses for sale in Tajpura Lahore having a place with various classifications recorded available to be purchased on the site. The general costs of comparative class houses can change because of assembling quality, the number of rooms, covered region, area, and by and large design too.

A house having a place with 5 marla houses for sale in Tajpura Lahore is accessible in the value scope of PKR 85 lakh to PKR 1.3 crore.

10 Marla houses are recorded available to be purchased in the value scope of PKR 1.3 crore to PKR 2 crore. At long last, 1 Kanal house for sale in Tajpura Lahore with 5 to 6 rooms can cost anyplace between PKR 2.4 crore to PKR 4.5 crore.

Know about the houses for rent in Tajpura Lahore

Mosques are a colossal piece of Pakistani culture, and the city of Lahore is home to the generally delightful, and most seasoned mosques in the country. Countless mosques can be found in each significant business and private neighborhood all through the city and Tajpura, Lahore, is no exemption. The region is home to an enormous number of mosques that make the existence of petitioners more helpful for the residents living in houses for rent in Tajpura Lahore.

Like the costs of private plots and houses the requesting month-to-month houses for rent in Tajpura Lahore from comparable classification houses in Tajpura, Lahore can also shift because of comparable components. The normal month-to-month lease of a 5 marla house can be anyplace between Rs. 30 thousand to Rs. 40 thousand.

In the scope of PKR 40 thousand to PKR 60 thousand, you can rent a 10 marla house for rent in Tajpura Lahore with 4 to 5 rooms consistently. At long last, houses having a place with 1 Kanal classification are accessible on a month-to-month lease of PKR 80 thousand to PKR 1 lakh.

In the range of Rs. 40 thousand to Rs. 60 thousand, you can lease a 10 marla house with 4 to 5 rooms consistently. At long last, houses having a place with 1 Kanal house for rent in Tajpura Lahore classification are accessible on a month-to-month lease of Rs. 80 thousand to Rs. 1 Lakh.

Know about the Residential plots for sale in Tajpura Lahore

Purchasing a home close to educational institutions, for example, school is something every parent should consider. Schools close to private networks positively affect the general land esteem, and can also acquire more accommodation the existences of the two guardians, and kids.

There are countless schools situated in the close area of residential plots for sale in Tajpura Lahore. The absolute most notable names in the Pakistani, training area have grounds situated in the neighborhood of Tajpura, Lahore, too. Askari School System has modern grounds situated on Canal Road a ways off of under 2 km. Tahir Public School, Rising Star School, and Graceway High School are completely situated on Canal Road to a good ways off of only 1 to 2 km from the residential plots in Tajpura Lahore.

There are many schools situated in the close area of Tajoura, Lahore. The absolute most notable names in the Pakistani, training area have grounds situated in the neighborhood of residential plots for sale in Tajpura Lahore, too. Askari School System has a modern campus situated on Canal Road a ways off of under 2 km. Tahir Public School, Rising Star School, and Graceway High School have completely situated on Canal Road too good ways off of only 1 to 2 km from the plots in Tajpura Lahore.

Signal house works a best-in-class grounds on Tajpura Main Road, reachable by foot in less than a short way from Umair Ali Road. Dar-e-Arqam School is situated on Main Tajpura Road. Holy person Paul's High School is another notable instructive establishment that has been serving individuals of Lahore for quite a long time.

There are different categories of plots in Tajpura Lahore which are available in the Tajpura, Lahore, having neighborhoods belonging to 3 marlas, 5 marlas, 7 marlas, 10 marlas, 14 marlas, and 1 Kanal. The prices of these residential plots for sale in Tajpura Lahore can vary with time due to factors such as area and locality, overall development in surroundings, and also that how easy it is to reach a certain area, and major arteries of Lahore from that place.

Know about the Commercial Properties for sale in Tajpura Lahore

Tajpura. Apex Group of Colleges is situated on Harbanspura Bridge, Main Canal Road, and inhabitants of Tajpura, Lahore can arrive at it via vehicle in less than 10 minutes. Nova Girls College is situated in Saddar Bazar, Shalimar Link Road a good way off of under 5 km. Peak Solutions College is situated on Zarrar Shaheed Road, Old Officer's Colony only 4 km away from the commercial properties in Tajpura Lahore.

Jinnah College for Girls and Hawk College both are situated on Zarrar Shaheed Road too. Concordia College is situated close to Rose Garden Canal Road, reachable via vehicle in less than 10 minutes. At long last, the popular Aitchison College that has been the take-off platform for probably the most noticeable famous people, business people, sports characters, and lawmakers of Pakistan is situated on Mall Road, and occupants of the commercial properties for sale in Tajpura Lahore can arrive at it via vehicle in less than 15 minutes even with moderate traffic.

Banks close to home take into account better, and safer utilization of banking offices effortlessly. Besides, banks close to private and business regions are consistently an indication of improvement and increased business movement. Having said that, pretty much every significant bank has a branch situated in the nearby area of Tajpura, Lahore.

Commercial property for sale in Tajpura Lahore have no characterized classes, and everything from a shop that covers 1 marla to 20 marla spaces are accessible in the area.

The cost can go from any place between Rs. 60 lakh to upwards of Rs. 3 crore, and the lease in Tajpura, Lahore is also reliant upon components like covered region, types of commercial property for sale in Tajpura Lahore, and commercial movement in the specific piece of the area.