Pros & Cons of living in a Portion 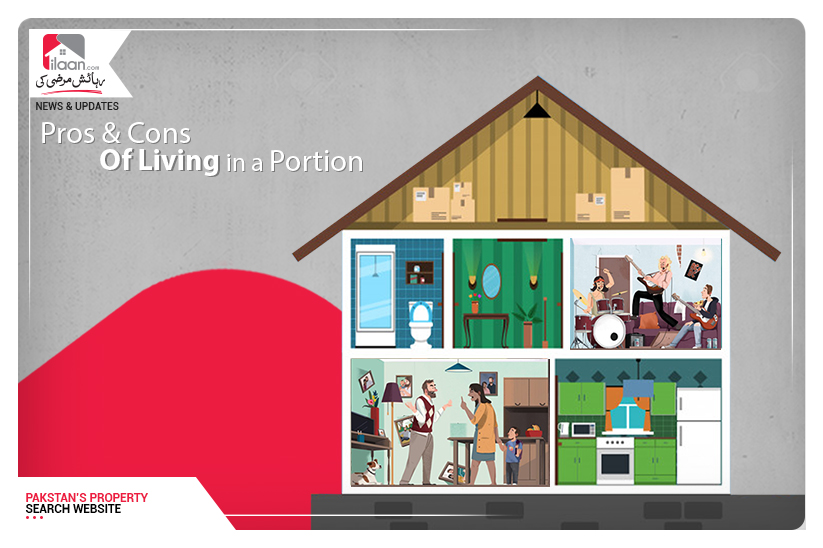 Pros & Cons of living in a Portion

Living in a portion can be the most exciting yet extremely frustrating thing as well. People adopt the portion system so that they get rid of paying a large amount in the form of rent. You get less accommodation in the portion system and sometimes compromise on your car parking area or personal lawn. There is a long list of benefits and pain points of living in a portion of a house.

Pros of living in a portion in Lahore

One of the major reasons why people choose to live in a portion is to pay a smaller amount of rent. It is a very common trend in Lahore that has helped a lot of people to afford a house. The upper or lower portion of a house lets you live a stable life with a lower rent price in a posh area. People belonging to the middle or lower class are taking huge benefits from this trend. The upper portion of the houses is usually cheaper than the ground floor portions. You would always find a wide range of portions for rent in Lahore in different areas.

Another very prominent reason why people go for portions rather than an independent house is their shorter commitment to stay. Unlike big and independent houses, you can get these houses on rent for the shortest duration. From 3 months to as long as you want. You can get an easy refund of the deposit amount you pay for these houses.

The repair or maintenance costs you spend on these houses are very lower as compared to the complete independent house. You have fewer rooms to repair, fewer walls to paint, fewer windows to hook, and fewer washroom fittings to adjust. You can make all of these things work in a very small amount.

Now that we have acknowledged the benefits of living in a portion, let’s look at the disadvantages that one faces in the same situation.

Living in a portion means that you are sharing your roof with another family. You two may be using the same entrance gate or using the same water motor. Usually, the impact of no privacy in a portion of life highly affects the family living on the ground floor. If the house is built in the old times then it is a possibility that both families are sharing the same staircase to get access to the rooftop. Family living at the upper portion does not have to deal with privacy concerns as much as the family living on the ground floor does.

There are a majority of old houses for rent in Lahore and these houses are occupying the same electricity and gas meters and the families residing in these houses are supposed to divide the bill amount. This is an old system that people have to follow when living in two different portions of the same house.

Over time, some house owners have separated the gas and electricity and gas meters for both portions. Utilizing the same meter for both families was an unjust gesture. If one family does not own an air conditioner, they would still have to pay half part of the electricity bill. Observing different situations, we can say that division of utility bills among the residing families is a con of portions in Lahore.

Another very big issue faced by the tenants residing in portions in Lahore is the mutual parking area. Parking is a big issue and if both families own cars then it becomes worse as well. One garage shared by two families can be a bone of contention behind a very big war. Everyone is looking for ways to protect their valuable tangible assets and lack of parking space can really be a hindrance in the process.

Besides these drawbacks, it is also a fact that living in a portion is cost-effective and gives you a great chance to enjoy life in a better environment. For details about portions for rent in Lahore, feel free to visit ilaan.com.

5 Tips to Turn Your Rental House into a Home