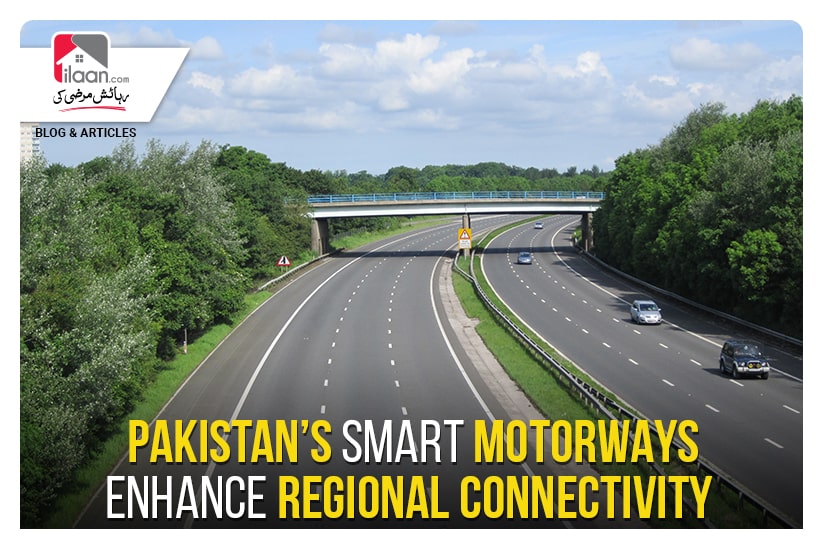 The idea of the development of motorways in Pakistan was considered in the 1990s. Pakistan was on the mission to build a world-class road network and about $11.5 billion was spent on the initial projects. This way the country stood out as the first in South Asia to adopt modern European-style motorways, and also set an example for the rest of the South Asian countries. The purpose behind its development was to reduce the rush over highways such as GT Road.

Expansion of motorways has played a vital role in connecting most of the mainstreams of the country, easing international trade, increasing economic development, and is allowing policymakers to influence geostrategic location for regional connectivity. The very first motorway was completed in 1997, and it connects the two major cities; Lahore and Islamabad.

Since that time, various motorways have been constructed which include M-1, and M-4. M-4 is operational now, and it connects the cities which include Multan, Pindi Bhatian, and Faisalabad via Shorkot, Jhang, Gojra.

Toba Tek Singh, Khanewal, and Pir Mahal. M3 became operational in 2019, and it connects Multan with Lahore through Abdul Hakeem as well as the already constructed M-4 near Multan. M-3 carries on till M-5, and in 2019, it came into operation.

Another Motorway constructed later is M-5 which heads towards Sukkur District, and further motorway from there which is to be named as M-6 is under construction this moment. M-6 will go to Hyderabad, and from there it will connect with the M-9 motorway of Karachi which is already existing.

Additionally, the longest motorway of Balochistan which is known as M-8 is still yet to fully complete, but half of it which has been completed is already operational.  M-11 which is present in the region of Central Punjab connects Sialkot, and Lahore while this will be brought into use next year.

In KP, M-14 links Hakka with Dera Ismail Khan as well as Hazara motorway, and they are under construction. While Swat Motorway has been completed and will become operational till Chakdarra.

Motorways, after 2014, turned out to be essential for the China-Pakistan Economic Corridor (CPEC) and National Trade Corridor project as they cultivate both inter and intra-provincial, and regional networks.

Therefore, through these projects, motorways expect to associate Pakistan's three Arabian ports (Gwadar, Karachi, and Bin Qasim Port) to the remainder of the nation, and the North with China, Afghanistan, and Central Asia.

Motorways; a passage for animating monetary turn of economic development

It also smoothed out the accessibility of different business and social activities.

Furthermore, refreshing roads foundation on current lines is fundamental to speed up the monetary turn of economic development.

Policies focused on road infrastructure ought to be carried out inseparably with metropolitan development strategies and other financial variables to acknowledge maintainable monetary development.

All areas and regions in Pakistan including Gilgit-Baltistan and Kashmir are presently associated through the network of great highways to help speed up socio-economic development.

The progressive state-run governments have put billions in motorways to lessen neediness, and guarantee equitable economic prosperity in all districts of Pakistan.

Wellbeing and Security of Motorway

FWO, which is overseeing most motorways, has gone to different measures to address the security worries of travelers. This appears as protected planning of expressways, the establishment of security hideout and about, fencing on the limits of highways, and continual up gradation of road structures.

Guaranteeing routine upkeep consistently is one of the critical components of satisfying the necessary guidelines of wellbeing and successful drive on motorways. The determined utilization of data innovation to smooth out the drive on motorways is a significant drive by FWO.

Through the installation of hi-tech security gear i.e., Intelligent Transportation Systems (ITS) Poles with study cameras on motorways, FWO has viably expanded the wellbeing of workers as they ensure a brief and opportune reaction to crises.

Overseeing smooth movement on the Motorways

Alongside giving continuous rapid travel on the fundamental carriageway, FWO has presented an Electronic Toll Collection (ETC) at all motorways. This system defeats traffic deferrals and clogs, alongside lessening exchange costs for the government.

With Electric Traffic Toll Management System (ETTM), suburbanites don't have to exhaustion themselves while holding up at Toll Plazas. Additionally, through M-Tags, suburbanites can use a restrictive passage, and ways out from motorways without holding up in any lines.

Also, FWO is running after path augmentation of all Toll Plazas with high traffic volume to stay away from gridlock. Since the motorway is a sign of infrastructure development in Pakistan, its upkeep and upgrade are of fundamental significance to the monetary development of the country.

For areas, regions, and districts to create to their maximum capacity, a hearty and versatile network is fundamental. In particular, with the shift to geo-economic aspects, motorways are important to guarantee a consistent movement of exchange and trade across borders.

It is a perfect time for Pakistan, which lies at the junction of West Asia, Central Asia, and South Asia, to additionally foster its motorways on current lines inside the structure of CPEC to meet its essential destinations.

Along these lines, it can develop an idle ability to more readily use its relations with its neighbors and accomplish territorial integration.

Different Ways to Incorporate your Hobbies in...