Lets Celebrate The Cultures of All Provinces of Pakistan 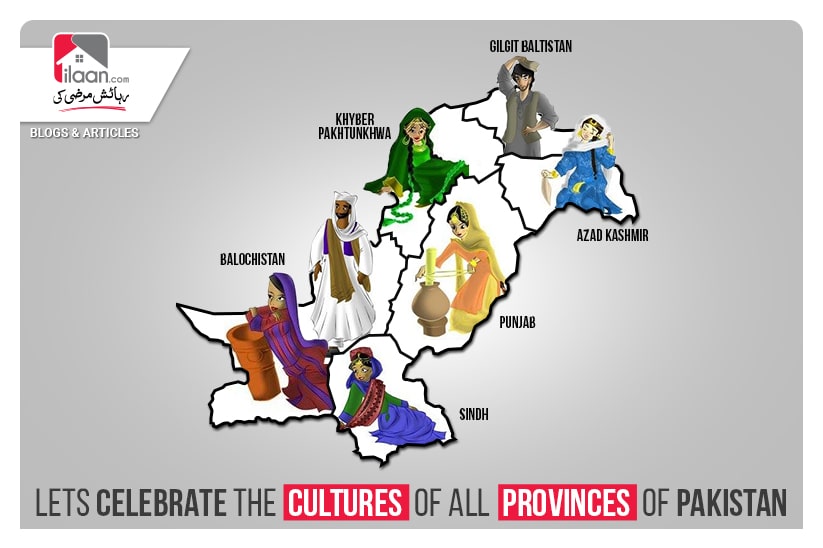 Lets Celebrate The Cultures of All Provinces of Pakistan

Pakistan is a country full of ethnic diversity. You will find different cast, norms, cultures, and traditions being celebrated in this country. It comprises four provinces, and each province has its lifestyle.

Let's find out more about the cultures and the rest of the highlights of all provinces of Pakistan.

People of Sindh wear Sindhi dresses which include loose Kameez with Shalwar. Residents of Sindh (localities) speak Sindhi especially when they talk to one another.

Sindhi people love to eat Sindhi food-low spices, and they celebrate Ekta Day that is Sindhi Cultural Day on the first Sunday of December every year. On this occasion, they wear Ajrak, and Sindhi Topi, Special musical programmers are held, and gift exchange norm is also followed the Sindhis on this day.

Sindhi weddings are quite different from the rest of the cultures, and their food is usually Curry, Mutton, Channa daal, Palak, and Dipasand Curry. Sindhi handicrafts are quite famous. Sindhi women knit, and handicraft work at homes and sell them which are famous country widely.

Sindhi culture can most prominently be seen in Sindhi tables, and shows. They promote it by using different mediums and practicing it without hesitance everywhere they go.

Famous sports of Sindhi culture are Kodi, Malakhiro, Wanjh Wati. Additionally, Sindhi music has its value with the mix of Sufi music at shrines. Different Sindhi folks are well-known at all times and pass from generation to generation.

Sindhi poets and their poetry is also precious ornament of Pakistan including Sheikh Ayaz, Shah Abdul Latif Bhattai, Sachal Sarmast, Ustaad Bhikhari. Sindhis are prominent because of their ajrak and Sindhi topi.

Sindhis are very much hardworking, open-minded, hospitable, and possess peaceful nature. In Sindhi temples, the images of Sri Krishna, and Sri Rama are placed, which were Hindu Gods.

Punjab is another province of Pakistan that is known world-widely as it’s the most prominent culture of Pakistan. The meaning of Punjab can itself be seen from its initials Punj which means fives, and Aab which means water/river.

As there are five rivers present that flows from Punjab, and they are River Ravi, River Sindh, River Sutlej, River Chenab, and River Jhelum. The land of Punjab is well-known as the land of five rivers.

Punjabi culture is the culture of Punjabi people that is known globally as the oldest, and the richest culture in the history of the world. They have different casts which include Gujjar, Rajput, Sheikh, Syed, Arai. The main place of the Indus valley civilization in Punjab was the city of Harrapa.

People of Punjab have a specific language that represents them, and it is known as Punjabi. When you will see someone talking in Punjabi, you will instantly recognize them as Punjabis who have come from Punjab or are residing in another province but belong to Punjab.

Language Punjabi has been originated from Sanskrit Punjab that has always been a place of great Fighters, and Saints. Bhangra is the music of Punjab which is spreading all around the world, and practiced by other Asian countries too.

Punjabis are too hardworking and are very much fond of dance, and music which you will find in their Bhangra beats too. Punjabis are quite moderate, and their mild nature can be seen in their behavior. You will see these people as religious, and fashionable at the same time.

Punjabi food is too famous in every country of the world, and people are crazy about Punjab foods. Many foreigners and tourists visit Pakistan to enjoy the actual taste of Punjabi food. Punjab is also famous for its crockery, as well as various ancient buildings.

Baluchistan in terms of geographical boundaries is the largest province of Pakistan which is covering about 48% of Pakistan`s area. The local people and things of Baluchistan are known as Balochi. Their culture is a bit conservative and based upon tribal divisions. Balochi dry fruits are too famous world-widely.

Sajji is the specialty of Baluchistan, and people love it in every province. They also love eating roasted lamb and mutton. Their men have a special dress code which is Turban, and Shalwar Kameez, while women wear Frocks and Shalwar.

The jewelry they wear is made up of metal, is very attractive, and goes in different areas for sale.

Balochi leather work is quite popular around the world. Matting for stone shelter, prayers mats, shoes, sandals, etc of Baluchistan is quite popular. Most of their women do embroidery on the clothes, and their culture is very much rich in literature, and poetry.

Khyber-Pakhtoon-Khuwah (KPK) was previously known as the North Western Frontier of Pakistan (NWFP). British administration named this area NWFP during the colonial times as this was the last frontier of the British Empire.

River Indus has its routes from the Himalayas, and flows down through Pakistan, and goes up to the Arabian Sea is the natural border of KPK with Punjab. It is portioned into seven divisions as well as tribal areas known as Federal Administered Tribal Areas (FATA).

If you haven`t visit KPK yet, then imagine heaven on earth which is a piece of land surrounded by the beautiful landscape of snow-covered mountains. It is surrounded by mesmerizing pine forest, and orchards of apricots, apples, peaches, oranges, and plums at the foothills.

The most beautiful lakes of the world are situated in this region, which includes Saif-ul-Malook that is present in the Hazara division, Maho Dand Lake which is present in Swat, and the Dude Patsar Lake.

Different glaciers, and a unique variety of Trout fish in the Swat area, and KP is known as the Switzerland of Pakistan due to its incredible beauty. People of KPK are quite loving, hospitable, caring, brave, and daring. Along with that, they are very much innocent.

The main language of KPK is Pushto while other languages include Kohistan, Hindko, and some other. Pukhtoon society gives much respect and protection to its females. Their females also respect them from all their hearts. Pukhtoons expect no financial support from their females.

The culture of Pakistan on the whole consists of various norms, values, culture, and traditions being practiced in its different areas. Pakistan is that country existing in the world which enjoys all four seasons every year.

Additionally, it has land, a moderate atmosphere, water, and residents of Pakistan enjoy all this fully. Pakistan is the best country in the world to live in, carrying all positive beauty, culture, and people around.

Hope you enjoyed celebrating the cultures of all provinces of Pakistan, and they altogether celebrate 14th August as the day of independence which is mutual for all.