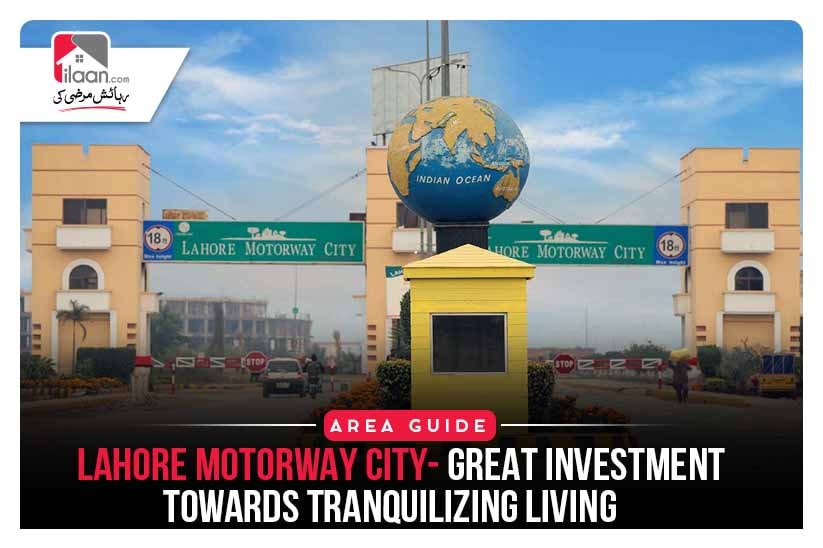 Lahore Motorway city is one of the finest housing schemes offering a wide range of residential opportunities from residential to commercial properties. This housing society is located in one of Lahore's most enticing prime locations. The cost of this residential property is a major selling point for investors. In terms of residency, LMC's neighboring developments and infrastructure are of a great grade.

Because of their dependable projects, which passed legal registration to your clients following the reservation, Renaissance Group made a big impression on the property firm. You must visit the exact location at least once because such a classy residence is not found throughout Lahore.

The ultimate goal of owners was to create societies in which all aspects of life coexist in peace and harmony while taking into account the environment.

Following the success of the Renaissance Group, which consists of five key enterprises with headquarters in Khan Chamber, Saddar, Rawalpindi, including;

Renaissance Group of Companies have three major projects going through the development phase, such as;

The master plan is approved by the Tehsil Municipal Administration rather than the LDA (TMA). The society did not fall within the LDA's jurisdiction at the time of its launch, but rather under the control of TMA, and so only needed TMA's approval.

It's worth noting that LMC was subject to LDA authority after December 2013. As a result, because TMA has already approved 20,000 kanals of land, the existing agreement between LDA and LMC no longer requires LDA approval. If and when LMC increases its surrounding region, however, the LDA must first identify it. Purchasing a plot for sale in Lahore Motorway City is completely risk-free, thanks to the NOC certification.

The location of Lahore Motorway City is great, as it is set in peaceful surroundings and offers all of the conveniences. The project covers around 5,000 Kanals. It's conveniently located near the Kot Abdul Malik Interchange on the road to Lahore and Sheikhupura.

The location is designed to provide a comfortable and secure environment close to the city's major hub. An instant drive from shops for sale in Lahore Motorway City will take you to the General Post Office and Thokar Niaz Baig in 10 minutes. In 12 kilometers, you may reach Punjab University's old campus, Mall Road, Lahore College, Gulberg, and the Lahore Railway Station.

AMENITIES AND FACILITIES YOU GET

Lahore Motorway City offers a variety of amenities that make it stand out. The society in Lahore occupies a unique position in the city due to its distinct characteristics.

The project is at a great location and links to the city's major road networks. Public transportation is easily accessible near offices for sale in Lahore Motorway City. Here are some of the points that you can easily approach while living in Lahore motorway city.

Jamia Mosque has been built, with exquisite artwork on display. At any given moment, the mosque can hold up to 10,000 people. In addition, mosques will be located in each block of Properties in Lahore Motorway City for the convenience of the residents.

Several schools’ colleges and universities will be housed as part of the project.

Almost all of the city's major banks will have branches in the Lahore Motorway City.

The Lahore Motorway City developers have included a hospital in their plans. The facility, which is now being built, will be equipped with cutting-edge medical technology and highly qualified staff. Emergency services will be provided 24 hours a day, seven days a week. Additionally, while living in the plots for sale in Lahore Motorway City, you may quickly access the following hospitals and clinics:

Several residential plots are offered in Jubilee Town as follows:

Right now, there are simply a small bunch of houses for rent in Lahore Motorway City Notwithstanding, when more properties are set up for convenience, their subtleties will be shared here for your benefit.

House and plot for sale in Lahore Motorway City prices provide a significant amount of economic investment possibilities in society. Various investment options, such as properties, houses, and newly booked plots, may be offered. Residential plots in the 5 Marla, 10 Marla, 1 Kanal, 2 Kanal, 5 Marla, and 10-Marla (single or double portion) floor categories are also available from the housing association.

You can also book homes and plots for cash at discounted rates. The reservation is merely a book with a three-year 20 percent installment plan. The project provides both convenience and comfort for the potential buyers of the plots for sale in Lahore Motorway city.

The payment will be paid in three easy installments over three years. It's a private housing society, so you don't have to worry about the safety of your family members. The amenities that all rich families require are available at Lahore Motorway City.

Lahore Motorway City is a great place to put your money. The society has been approved by the appropriate department, making it a safe real estate investment. Model homes have already been built and will be taken over after an 80 percent payment system. The key features of this society are its top-notch facilities, affordability, and ideal location. As a result, ilaan.com strongly advises that this is a once-in-a-lifetime opportunity to invest for a better living.