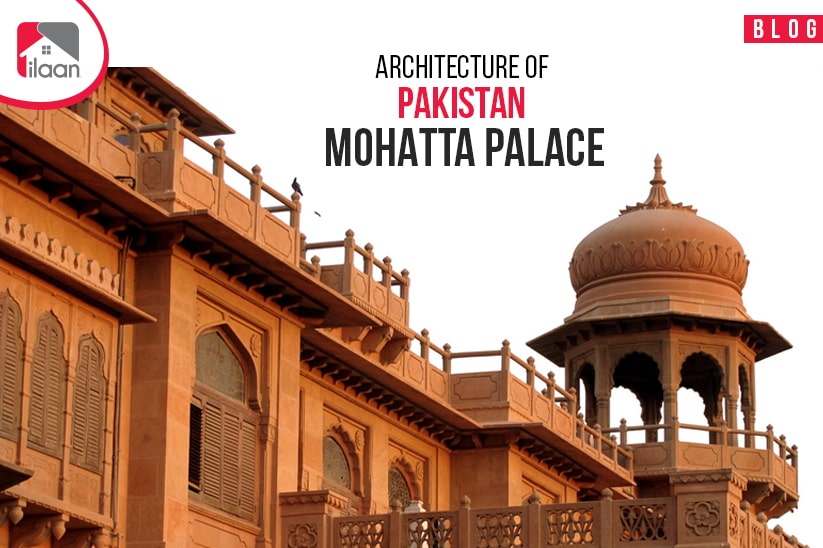 The Mohatta Palace was constructed upon the breezy lands of Clifton during a time foreshadowing nothing but turmoil however, the story etched onto the palace resonates with love. The palace stands proud in Karachi, with its former grandeur kept intact while its story has been lost to the prying eyes of time.

History of the Mohatta Palace

The solemn architecture of Karachi, similar to the rest of the subcontinent, had been introduced to the Indo-Saracenic revivalist architecture during the British Raj. Utilizing the same architectural design, the Mohatta Palace was designed by one of the first Muslim architects of the time, after being commissioned by Shivratan Mohatta in 1920.

As his history unfolds, it is revealed that the palace was not constructed for lavish living, but to help Mohatta’s beloved wife recover from a deathly ailment, whose cure was yet clasped within the future. Desperate to find a cure, the doctors suggested moving to the breezy lands cornering the Arabian sea which could prove beneficial to her health.

Therefore, embarking on a conquest for love, Mohatta initiated the construction of the palace. Utilizing his wealth, the entrepreneur hired the architect, Ahmed Hussein Agha, one of the first Muslim architects living in the Subcontinent. For the project, Agha traveled all the way from Jaipur, to Karachi. Within the next six years, a palace so tall and magnificent stood upon the once barren land.

Soon after, the palace was occupied by the Mohatta Family, which seemed to bring nothing but good fortunes stumbling their way. With Shivratan’s wife making a full recovery, a grand celebration was also held within the palace’s premises.

Occupying a total area of 18,500 sq ft, the palace’s façade is adorned with intricate floral motifs, stone brackets, domes, spandrels, stained glass windows, balustrades, and graceful railings. A total of nine domes have been placed atop the marvelous construction, which have been intricately adorned with peacock motifs, with the central dome being placed in the middle. The façade consists of blue stained-glass windows, which open to reveal an ornamental garden. The rear of the palace showcases a slightly different variation, with its huge arched stained-glass windows delicately designed to represent birds’ wings. Various floral motifs are intricately carved upon the stone palace, such as marigolds.

The motifs are also widely present upon each window or doorway, which is framed by two ornate marigolds. The towers present throughout the palace, alongside the balustrade terrace, have been installed with dainty knobs, with a rectangular box-like shape chiseled into the balusters.

The inside of the palace has been blessed with polished staircases, long corridors, and doors opening within doors, providing ample airflow to its every nook and cranny. Most of the rooms located on the ground floor have been designed for entertainment purposes, whereas the more private facilities are located on the 1st floor. A terrace has also been constructed on the 1st floor which is covered with a shade to provide relief from the intense sunlight. A temple for the Hindu god, lord shiva has been constructed on the terrace, providing the palace with a distinctive presence within the high-class neighborhood.

The ground floor is majorly reserved for entertainment purposes, with rooms located at the right side of the entrance, two on the left, and one at the back. The spacious corridors within the ground floor have been extensively decorated with motifs and ornaments.

The first floor opens up to a large hallway in the middle with 10 doors studded on each side, opening up into the corridor, framing it from both sides. The private rooms are located on the east and west sides of the building. These are four large private bedrooms, with attached restrooms and dressing rooms.

Unblemished stairs lead downstairs to the palace’s basement, where a hot water pool chamber has been constructed which is connected to a changing room nearby. The water supply of the chamber is known to have both, hot and cold-water supplies attached to it. Small ventilators are also located near the pool which were used to let out the accumulated steam, and possibly used as a source of sunlight as well.

After the war of independence, Mohatta along with his family moved to India, soon after which the Government of Pakistan acquired the building to house the Ministry of Foreign Affairs. Afterward, Fatima Jinnah, the sister of Quaid-e-Azam moved into the palace in 1964, where she stayed until her last breath. Later on in 1980, the palace was sealed by the government and turned into a museum.