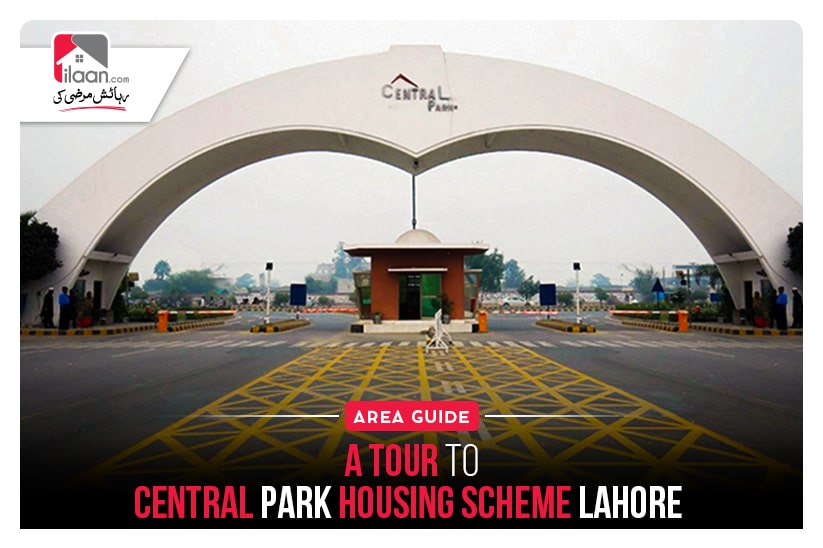 Central Park Housing Scheme (CPHS)-Lahore is an affluent development that spans 9,500 Kanal and has more than 50 commercial buildings in its immediate surroundings. Its well-planned road network connects it to all fundamental services, such as health, transportation, and education, making daily life easier.

This society is also connected to the nearby neighborhoods of Palm City and Elite Town via the main Lahore, Kasur, and secondary Sue Asil Roads, allowing for seamless communication.

It is a project of Urban Developers, a well-known name in the city's real estate sector with over three decades of experience. The developer has a long history of creating master-planned communities that are specifically tailored to meet the needs of real purchasers and investors.

The developers have developed many projects all over Pakistan such as follows:

Central Park, housing scheme is located on Ferozepur Road/Lahore-Kasur Road, approximately 20 kilometers from Kalma Chowk and 10 kilometers from Gajju Matta. The Ring Road's Southern Loop connects it to other important areas such as DHA Defence, Cantt, and Gulberg. The value of property prices in this area has risen dramatically as this society is easily accessible through the various areas of Lahore.

The Lahore Development Authority has authorized the Central Park Housing Scheme Objection Certificate (NOC). So yet, there has been no word on the illegality issue. This indicates that investment in this housing society, which offers dream housing and the best pricing for plots for sale in the central park housing society, is a secure bet.

Blocks C, D, and F each have 10 Marla plots, whereas Blocks E and H each contain five Marla cuttings. The remaining blocks have plots of 10 Marla, 1 Kanal, and 2 Kanal.

The freehold lots in each of the complex's blocks are not only fully developed but also ready for possession and house construction.

Aside from that, potential purchasers can choose from a variety of 1 and 2-bedroom flats for sale in the central park housing scheme in various complexes. These completely furnished apartments have luxury décor and modern fixtures.

COMMERCIAL PROPERTIES FOR SALE IN THE CENTRAL PARK HOUSING SCHEME

Buyers can also purchase commercial plots for sale in central park housing scheme of 5 and 8 Marla, which are readily available for purchase, through the housing project. Investing in commercial buildings will be a lucrative option for potential investors because most of the blocks in the community are still under construction.

Central Park Medical College, Central Park Teaching Hospital, and a beautiful mosque are also located within the housing society. Restaurants, tailoring services, pharmacies, laundry, barbershops, greengrocers" stores, and meat shops are available near the plots for sale in the central park housing scheme Lahore.  Here, in addition, Cash & Carry, a well-known grocery shop, is open in the community and is run by the administration.

In terms of property values, the construction of the Lahore Ring Road (SL 1 and 2), as well as the opening of Southern Loop 3, have considerably improved the monetary value of the houses for sale in Central Park Housing Scheme.  Additionally, the availability of basic services and amenities, as well as the fact that people have begun to live in the society, add to its value.

FUTURE OF PROPERTIES IN THE CENTRAL PARK HOUSING SCHEME

In the future, the Central Park housing scheme will be home to a variety of business zones as well as full-fledged marketplaces. As a result, in addition to providing convenience to residents, it also increases the overall value of the homes in this neighborhood. As a result, residents of CPHS have a lot of options when it comes to buying medicines, groceries, plumbing, and electricity. As the societal evolution process nears completion

ADDITIONAL AMENITIES YOU GET

Residents can readily use all means of public transportation due to its convenient location. From the main road, you can take a cab or rickshaw, or catch a bus at the nearby bus stop. Furthermore, the Offices for sale in Central Park Housing Scheme Lahore are close to the Metrobus system, which gives easy access to various parts of Lahore.

There are several banks and ATMs available in the vicinity that can be easily accessible through houses for rent in Central Park housing scheme Lahore.

You can find many supermarkets in and around the scheme. These include Abyan Mini Market in 38 A, Al Madina Milk Shop, Islam Mart in 32 A, Al Doha Shopping Mart, and Madina Martin Block A. Other markets are AS Cash & Carry in 45 Block B and Central Park Cash and Carry near CPMC Boys Hostel.

Having places of worship within or near the society can improve the residents' convenience even more. As a result, the developers of CPHS have taken this into account as well. To better serve its residents, the community has plans to build mosques in each block.

In society, there are now two mosques in operation near the flats for sale in Central Park housing scheme Lahore. You can visit the spectacular Central Park Grand Mosque (Block B), which features upmarket architecture and can accommodate a big number of worshippers at once. Jamia Masjid is the other large mosque (Block A). This air-conditioned mosque is ample with all the necessary amenities.

When it comes to recreational places, the Central Park housing scheme Lahore offers parks in every block, and many of them are still under construction. Block A Park and Al Khaliq Park in Block A, Block F Park, Block G Park, and Abdussalam Park near Central Park Cash & Carry are the most popular options.

Furthermore, in Block C of the society, there is a 500-Kanal Main Park near to the houses for rent in central park housing scheme.   It includes a sports facility, a children's area, a lake, a jogging track, a sundial, social activity space, a café, and public restrooms.

The residential scheme neighbors some of the most successful housing societies.

Furthermore, through LDA City initiatives, the residential neighborhood will be connected to the Lahore Ring Road, allowing residents to quickly escape Kahna during high traffic hours. A 132 KV Grid Station within the premises ensures that the residents of the Central Park Housing Scheme have an uninterrupted supply of energy.

In conclusion, because of the housing society's ideal location, potential inhabitants will be able to live away from the city's commotion and enjoy a pollution-free environment. The developers of this neighborhood meticulously planned it with the buyer's convenience in mind. The developers aim to make sure that people from all walks of life may feel at ease here.

Houses in central park housing scheme are designed in a way that is appropriate for those who desire to spend their lives in a perfect environment. Investing in this housing scheme will not only reward you but will also provide you with the life experience you have always desired.