CJP orders Sindh Govt. to revive KCR in a week 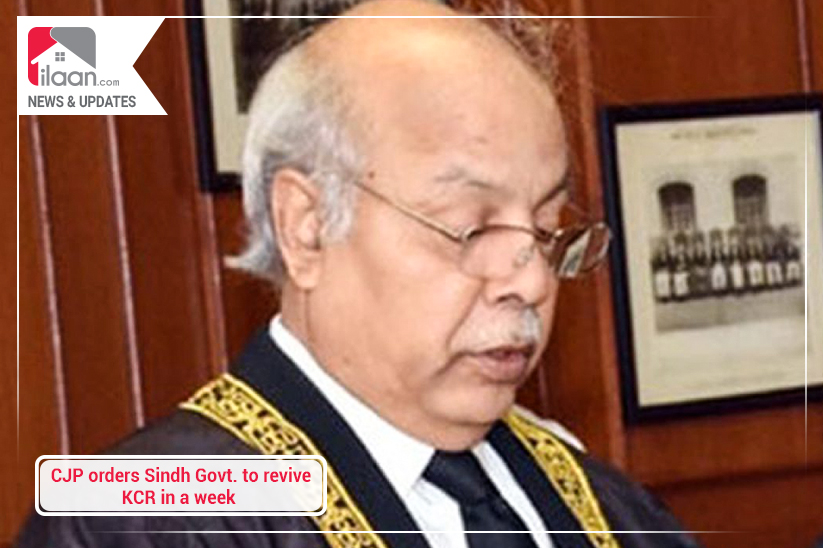 CJP orders Sindh Govt. to revive KCR in a week

Karachi: Chief Justice of Pakistan (CJP) Gulzar Ahmed has warned Chief Minister Sindh Murad Ali Shah that the Supreme Court may issue contempt of court notice if they failed to comply with a 2019 order regarding recovery of encroached Railways land in the city.


A three-member bench presided by CJP Gulzar Ahmed conducted the hearing of the case pertaining to the restoration of Karachi Circular Railway at the Supreme Court’s Karachi Registry. Commissioner Karachi, secretary railways, advocate general Sindh, and Mayor Karachi Waseem Akhtar was present during the hearing.

The chief justice ordered the authorities in Sindh to restore Karachi Circular Railway within a week and remove all the encroachments. During the hearing, a contempt notice was also issued to Sindh Provincial Minister for Labour Saeed Ghani over his remarks of not removing the encroachments.

When asked about the progress of Karachi Circular Railway, the chief justice was told by the Sindh Advocate General that it is impossible to restore the old KCR. “There were 24 KCR gates, most of which are encroached, the land was to be provided by the Ministry of Railways,” he said.

To a question, the advocate general said the court had ordered the restoration of the circular railway but the project has now been absorbed into China-Pakistan Economic Corridor. He informed the court that the provincial government formulated a framework for KCR’s restoration thrice and sent it to the federal government, adding that the Sindh government cannot, by itself, send a framework directly to China.

On the other hand, the railway's secretary said the ministry was not delaying the project and is completing its responsibility. Responding to this statement, the CJP said that even though the ministry of Railways has not done its job according to the agreement, what have you (Sindh authorities) done? He also ordered the Karachi commissioner to remove all encroachments from land belonging to Pakistan Railways.

The Mayor Karachi Waseem Akhtar also came under fire as the CJP inquired, “What have you done until now? You are the real head of Karachi. Whether it is Railway Housing Society or petrol pumps, demolish whatever comes in between. We need Karachi Circular Railway to be restored in its original form.”

The case was adjourned on the orders that the buildings on Railways land would be bulldozed and the Sindh High Court should be informed it was done on the orders of the Supreme Court.